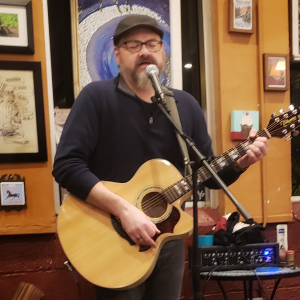 He’s been a fixture on the mid-Atlantic con scene for much of the last decade as a musical mercenary, through his regular gig with wizard rock icons The Blibbering Humdingers, as former guitarist for nerd rock band Dimensional Riffs, occasional part of Metricula’s Friends With Benefits band, and backing up whoever else will have him. He’s performed at geek friendly events such as Marscon, Ravencon, Balticon, Concarolinas, Consonance and Dragoncon, as well as numerous festivals, drinking establishments, and living rooms throughout the country. For the past few years, he’s been plying his trade performing original material in filk circles on both coasts and open mic nights in his hometown of Richmond, Virginia.

When not living the rock star life, he spends his days as a public sector IT program manager, husband, father of three, companion of cats, and basic middle-aged guy with interests in mountain biking, 70s and 80s comic books, craft beer, and fishkeeping. His personal musings, gig schedule, and social media activity can be found at www.chuck-parker.net/wordpress.