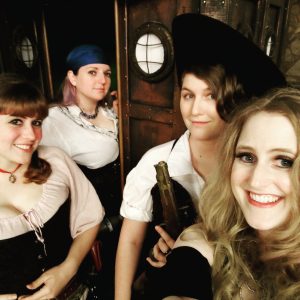 The Misbehavin’ Maidens are a bawdy nerd-folk band comprised of four women from the Washington, D.C./Baltimore area with a love of feminist, sex-positive music, LGBTQIA+ representation, parodies, drinking & fandom references for the 18+ geek crowd.

Performing in cosplay, pirate garb, and occasionally plain clothes, the group can be found at local theme bars and fandom conventions all across the country, entertaining those who are young at heart, but who have their minds in the gutter. The group has performed at Dragon Con, RavenCon, Wicked Faire, Nauticons, several D.C./Baltimore area burlesque and variety shows, and local theme bars, most frequently at the Limerick Pub in Wheaton, Md.

The band, which began rehearsing together in late 2012 and performed in public together for the first time in May of 2013, consists of four members: Flint Locke, “Lucky” Annie LeBlanc, Madame Rouge, and Saber Tompson. While all of the ladies come from a “pirate” background, they embrace a wide range of subcultures, offering musical tributes to everything from steampunk to anime.

After a wildly successful Kickstarter, their debut, independently-released album, “Busted,” was released August 15, 2015, and their second album, “Sloppy Seconds,” was released April 11, 2017.