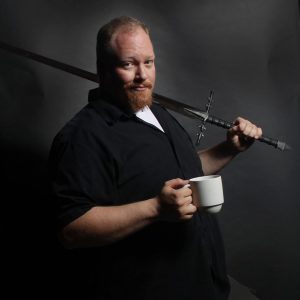 To say that I enjoy podcasting and new media would be a gross understatement. My credits include mentions in high school and collegiate papers, newspapers, Podcasting for Dummies, and Advanced Podcasting Tricks. I have been called an innovator, having created the first fandom podcast (RotO), the first podcast for an Independent Wrestling Federation (Halo: Hardwired), and distributed the first comic book made available via podcast feed (Podcast 9). I was the force behind the official Troma Podcast and a former host/editor of the 501stCast, the official podcast of the 501st Stormtrooper Legion. I produced the long running Amazing Pulp Adventures Radio Show starring Mister Adventure, serving as writer and primary voice actor for recorded and live stage versions. I served as the Technical Editor for the most recent (3rd) edition of Podcasting for Dummies. Currently, I am co-host on the long running Geek Radio  Daily podcast (geekradiodaily.com) and a variety streamer (twitch.tv/richiemuenster).

I’m a Whovian, Star Wars fan, and is known to watch the occasional episode of the Handsome Brothers Ghostbusting Power Hour known as Supernatural. You’ve probably seen me at a con as the Master of Ceremonies or on a panel about podcasting (I starting podcasting in ’03, for Pete’s sake!). You may have seen my alter ego, Richie Muenster on a burlesque stage as an emcee for Creativity Out Of Context (an art collective I co-founded with Sarah Jynnx), the Succubus Sorority, The Riot Kittens and formerly of Nerd-Vana, NC Performers Society and Vaudevillain Revue (I keep my clothes on, I’ve read the petition). I am the current reigning 3rd place champion of SparkCon’s Pun Tournament, like long walks on the beach and my turn-ons are metal bikinis, goth girls and Nathan Fillion.