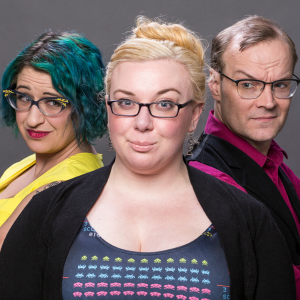 The PDX Broadsides are a nerdy pop-folk trio hailing from Portland, Oregon (hence the PDX in their name!). They have been playing music together since 2011, and have become known for their harmonies and clever writing. The PDXBs write about fandoms and feelings, science and space, and celebrate geekery of all stripes as they sing about what they love.

The PDX Broadsides have played around North America in venues large and small, including tours of both US coasts. They’ve performed at conventions including Dragon Con, OryCon (as musical guest of honor), and Emerald City Comic Con, or you may have seen them play alongside The Doubleclicks, Sarah Donner, or Misbehavin’ Maidens! They have released five studio albums, the most recent being RELATABLE CONTENT in 2019, and received two nominations for the Pegasus Awards for Excellence in Filk. They are signed to Doubleclicks Records.

Individually, each member also has their own nerdy street cred: Dr. Jessica Hebert is a postdoctoral ob/gyn researcher and an internationally-presenting science communicator. Hollyanna McCollom is the author of the Moon Guide to Portland, a freelance travel writer, and coffee expert. Christian Lipski was Portland’s foremost comics journalist and served as a judge for the comics industry’s Eisner Awards.